Born in Montréal Canada in 1963, Josée Nadeau grew up both in Montréal and Ottawa, Canada. At the age of 7, she had her first private lesson of art. At the age 13, she needed her parents’ permission to draw nude models at the Ottawa school of art, where she drew alongside pupils twice her age. Nadeau attended the Emma Lake workshop after graduating in Fine Arts at Concordia University in Montréal in 1985. It was there that she painted with some of the most prominent Canadian artists, such as Dorothy Knowles, David Alexander, Bill Pereudoff. Nadeau later traveled to Europe, where she worked equally in Spain, where both Picasso and Dali also worked (studied or trained) at the Bellas Artes Institute of Art in Madrid.

In 1998 Nadeau met and became prodigy of European Art Expert Gerald Van der Kemp and his wife Art Advocate Florence. Known for being the Founder and President, Chevalier de la Legion d’Honneur, Chevalier des Arts et Lettres, Foreign Correspondent Member of the Institut de France, Academie des Beaux-Arts, (Mr. Van der Kemp was responsible for having saved the Mona Lisa during WWll and masterminded the restoration of Chateau de Versailles, the palace of the Sun King of France, Louis XlV for a period of 27yrs (1953-1980).  Van der Kemp who was curator of Claude Monet’s garden at the time provided  Nadeau with his personal use of his studio, and the VIP suite where Nadeau would reside during her stay as their personal guest on the grounds of  Claude Monet garden in Giverny France.

Van der Kemp took a liking to Nadeau’s work and passion for it wishing he could have pursued his art commercially like she did something he could not fully do once he became curator of Versailles thinking it was unethical to do so. Nadeau, Always the guest at the head table along with dignitaries and Royalty. Nadeau became their personal guest artist in residence. Gerald Van der Kemp was known as the last Napoleon of our time. After many years of neglect by a nation ambiguous in its attitude toward symbols of royalty, Mr. Van der Kemp devoted himself to returning the principal galleries of Versailles, apartments and grand salons to the way they were in the 17th and 18th centuries.With the encouragement of President Charles de Gaulle and his culture Minister, the writer André Malraux, Mr. Van der Kemp scoured the world for treasures sold after the French Revolution and assembled an army of master craftsmen — carvers, plasterers, gilders, silversmiths, seamstresses — to repair or recreate the palace’s lost splendors.

Van der Kemp was a painter himself. In 1976, he was given the post of curator of Claude Monet’s garden where he restored and revamp the property making it to be one of the most visited garden in the World. She was also the link between the people from the small town of Giverny and the founder of the Versailles Foundation, Florence Van der Kemp. 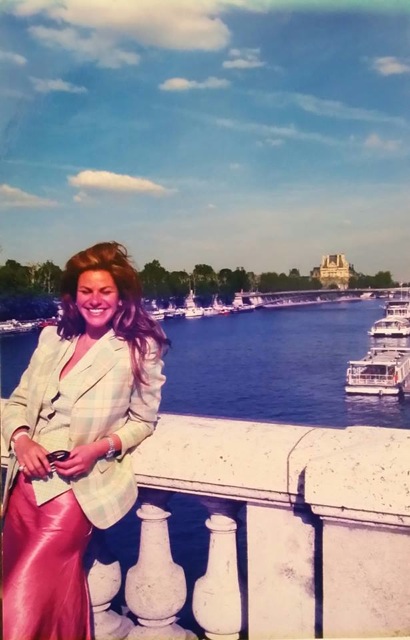 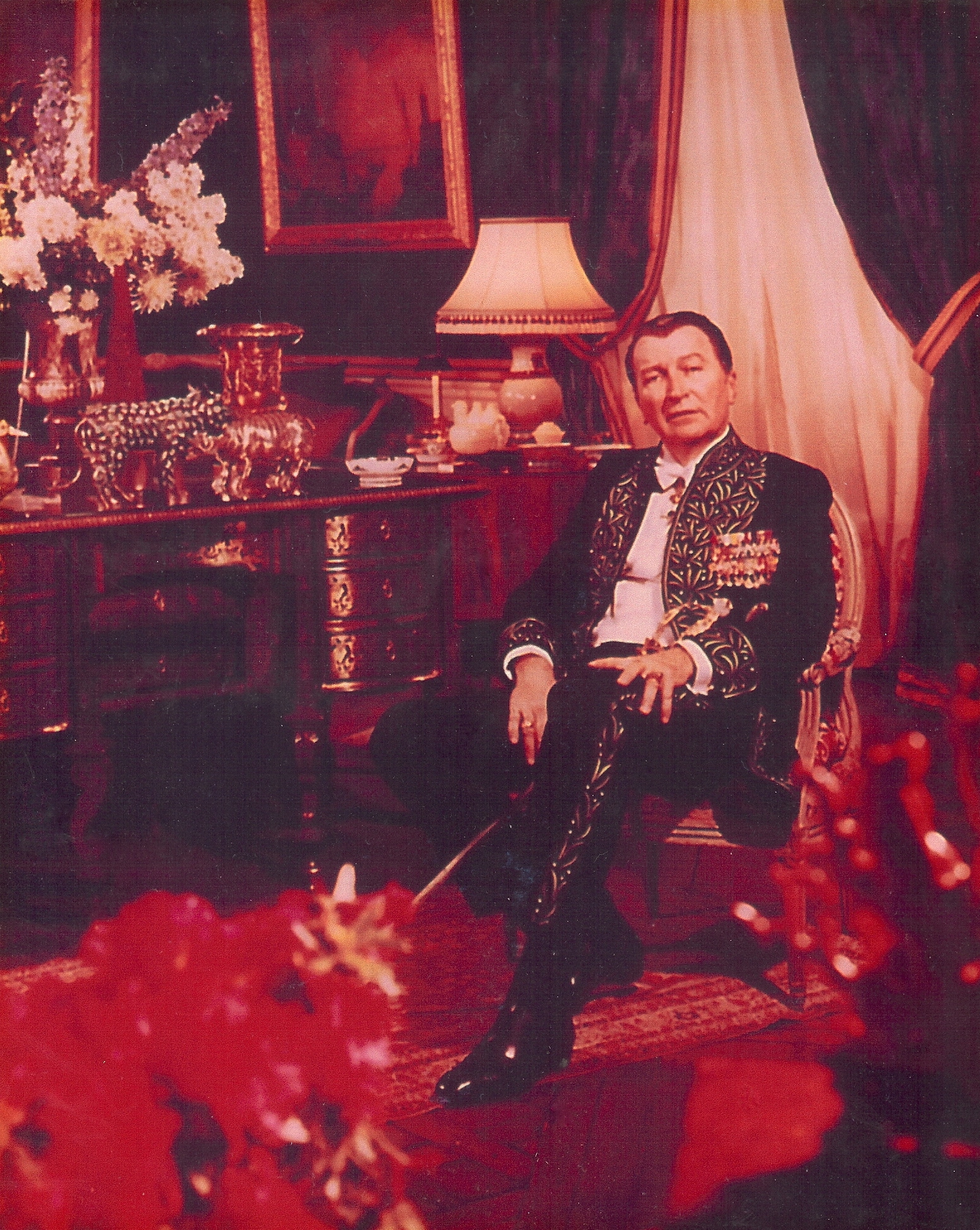 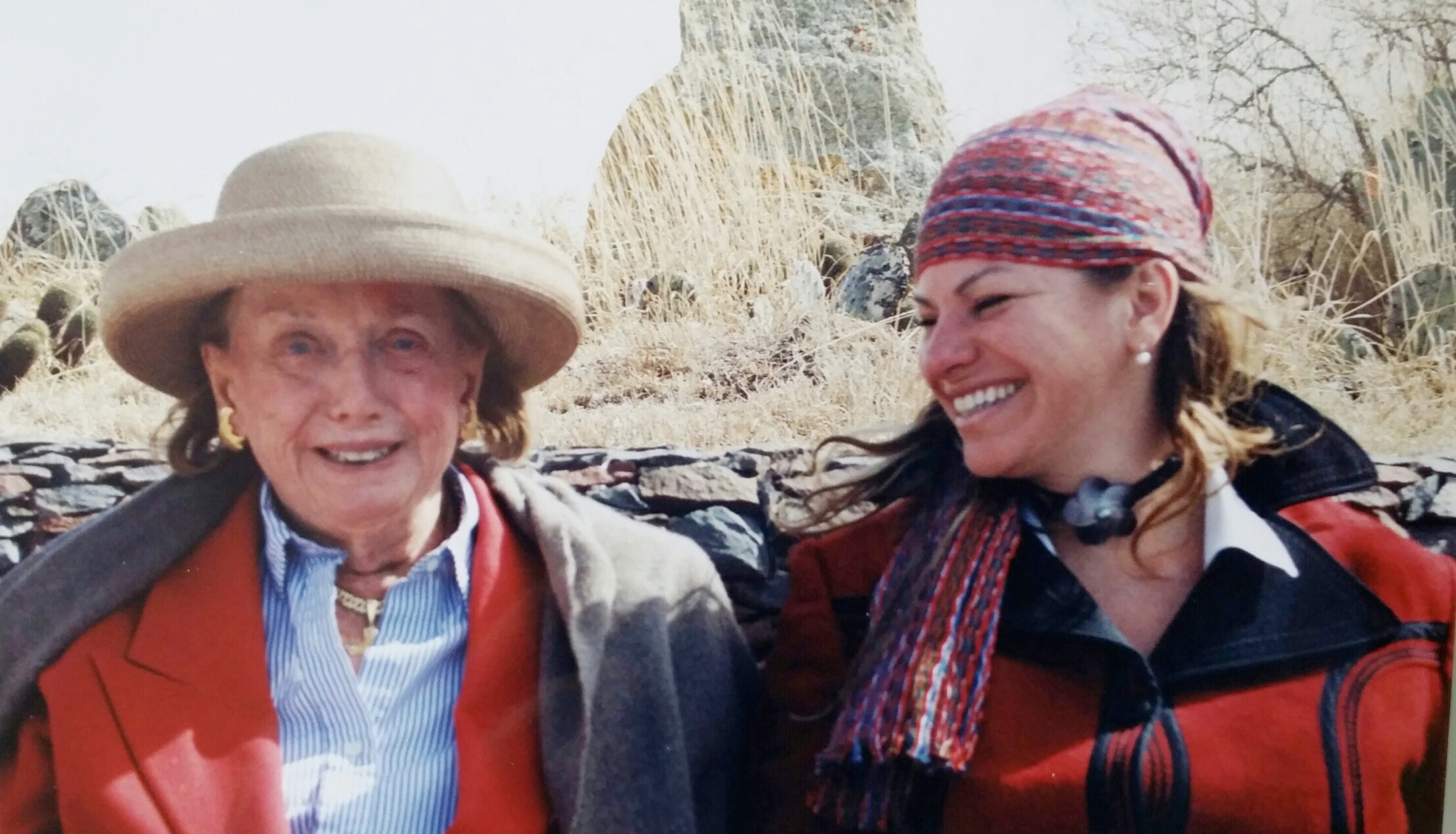 At the end of the curator’s life, the artist would bring her rolls of canvases while Van der Kemp was bed ridden, they would share many visits conversing about art as the Art expert would examine what she had created during her visit. They shared a similar palette and simplicity of subject matter. Van der Kemp was taken with her art saying that Nadeau had much talent. Nadeau was invited to all functions and placed at the head table as their guest painter along with Ambassadors and Royalty. Florence Van der Kemp introduced Nadeau to High society of Europe, When Nadeau was announced of her patron’s passing, the artist took the last flight that was available to attend the funeral in Paris which was followed in Giverny for the burial. Florence Van der Kemp died at the age of 96. She now rests beside her husband Gerald Van der Kemp and Claude Monet at the church cemetery of Giverny

Nadeau works in a similar way of Monet in its choice of colors, working on many pieces at once . Applying her first impression and stepping back. however, the sense that she will work on many pieces at so that the palette can be used on many canvas however unlike Monet
2007, Nadeau equally visited and was the guest at Chateau de St-Georges-Motel in Eure, France where Winston Churchill painted and would spend his summers 1935, The personal home of Vanderbilt.

In 2000, after a personal encounter with George Harrison of Beatles fame whom she met at the personal home of Guy Laliberte, founder of Cirque du Soleil, Nadeau ventured into painting live on stage in the company of a full orchestra. The inaugural event in 2002 was staged in Montreal with the Allegra Orchestra and televised by Global TV. She repeated her live performance again in 2012 with the Salt Lake City Symphony Orchestra of 95 musicians at Gardener Hall, sponsored by Utah Art Advocate, Beverly Sorenson. On July 18th, 2014 she created a 8 feet by 8 feet painting of Nelson Mandela in front of dignitaries of the United Nations and South Africa for the 1st birthday celebration of Nelson Mandela after his passing. 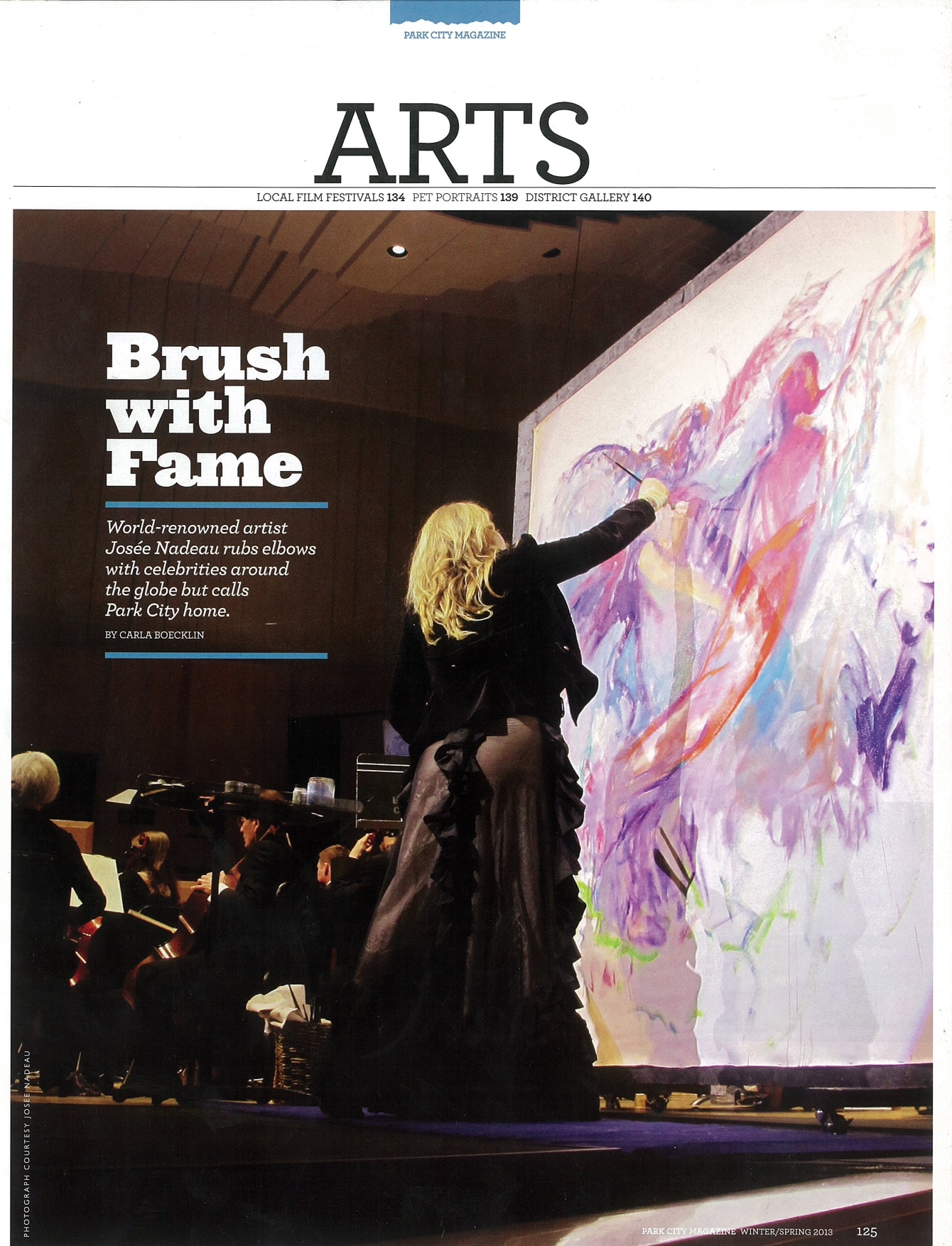 Since that time she has painted for their Royal Highnesses Crown Princess Katherine and Prince Alexander of Serbia, Dionne Warwick’s 50th Anniversary commemorating her professional life, Harry Belafonte, Ralph Lauren. She also created the 100th Anniversary painting commemorating Legal Aid for the State of Maryland which was unveiled by the first lady Katie O’Malley. The painting, honoring 100 humanitarians from the State of Maryland, was painted live in front of an audience 700. 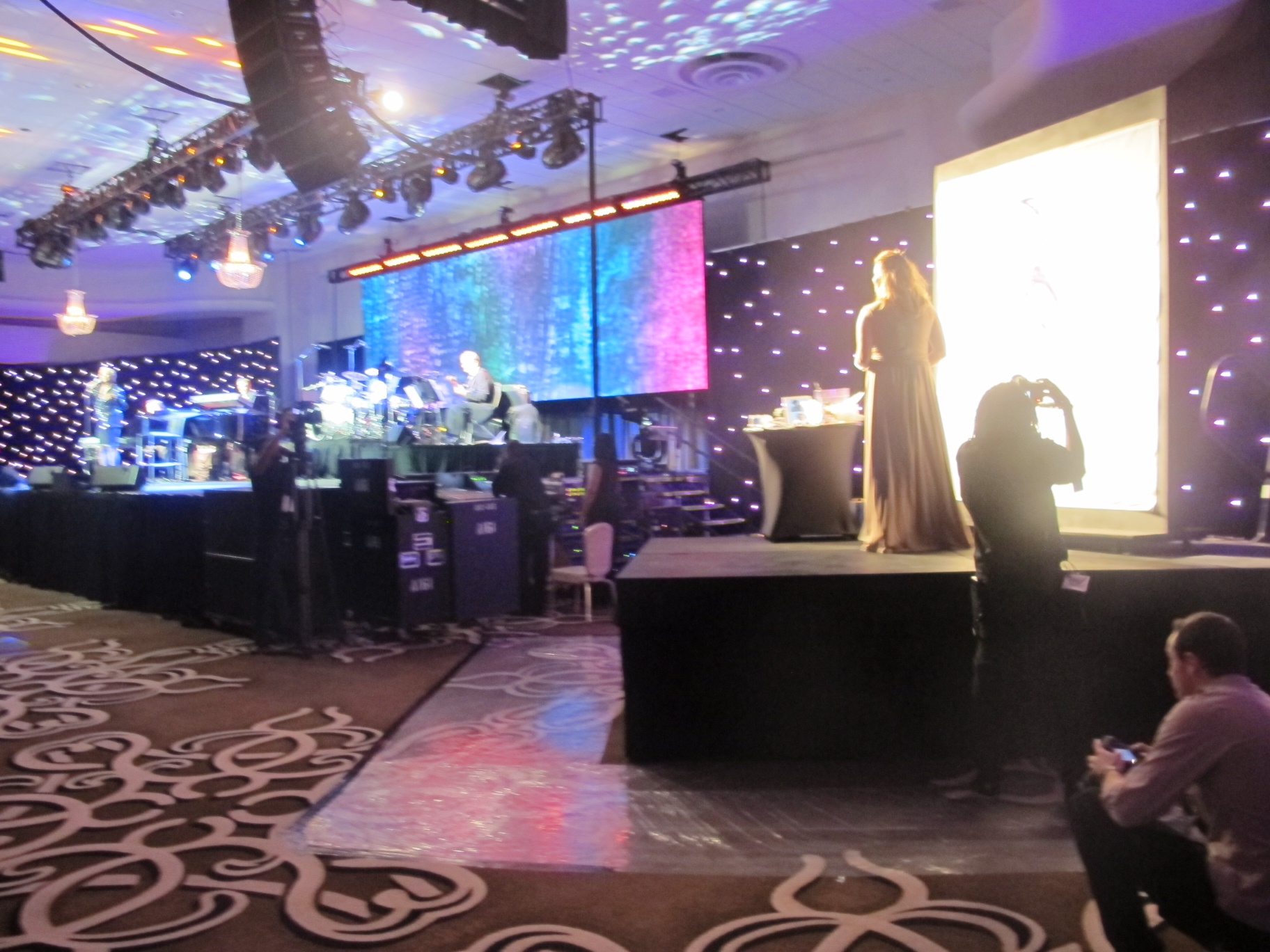 Commercial projects include being appointed the official artist for HP Printers where her painting, The Bull, was chosen for the entryway at New York Art Expo in 2010. The painting also made the cover the Los Angeles Times. Nadeau has completed large equestrian paintings for storefront windows of Ralph Lauren in the Hamptons, and the mega-yachts of renowned designer, William R. Eubanks in Palm Beach. The most recent commercial project was a commission received from the Sports Youth Alliance to capture on canvas, the USA Olympics medalists from Park City, Utah to celebrate their victory at Sochi Winter Games 2014.
Other sports related events took place at Palm Beach World Equestrian Festival where Nadeau was the featured solo guest artist. This significant equestrian event attracts riders from all over the world with total prize money in excess of $8 million dollars during its three-month tenure. Nadeau completed 3 events including, Jumping, Dressage and World Cup Polo in Miami. 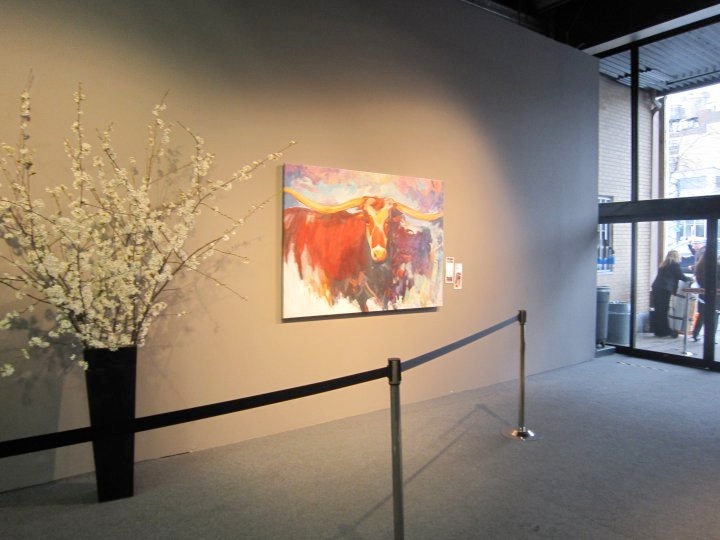 It was an honor to have been provided with the studio of the man who’s contribution to the Art World surpass no other. Gerald Van der Kemp and his wife Florence I shall always be grateful for.

My international background and recognition has allowed me to contribute greatly to the arts, not only creating paintings of gardens, personalities, scenes from cultural places, the finest equines and magnificent yachts, but bringing the European flare and culture to America with my style of brush stroke and share with the World what Gerald Van der Kemp saw in my work. 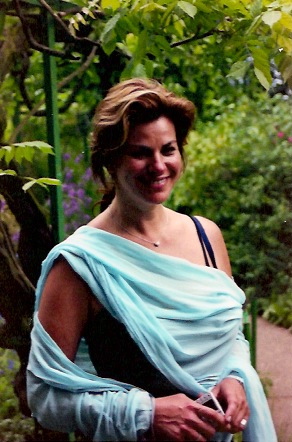 1992 – Art Expert, Chairman of the Board of the Montreal Museum, Canada acquired a painting for his personal collection at her first showing.
1998-2006 – Had a gallery in Montreal between the Ritz and the Museum of Fine Arts— Featured only Ms. Nadeau’s work
1998 – 2008 – Guest artist and protégé of French art expert, Curator Gerald Van der Kemp at Monet’s Garden, Giverny, France.Permanent prize studio on the grounds of Monet’s Garden
1999 – Featured on the cover of the Concordia University Magazine
2000 – Pierce Brosnan, actor/artist, in Montreal, Canada, acquisition of painting
2002 – Named Extraordinary Women of Montreal
2004 – Personal guest at the head table at The Ball of Versailles, celebrating the restoration of the Trois Fontaines Bosquet
2004 – Met U.S. Ambassador to Paris, Howard H. Leach
2004 – Guest at the annual luncheon of The Versailles Foundation. Meet LA, NY Times
Art Critic John Russell
2005 – Personal guest at the U.S. Embassy in Paris for the documentary of Architect
Frank Guery under Ambassador Stapelton
2005 – Personal guest of Florence Van der Kemp at the U.S. Embassy in Paris to meet
Ambassador Craig Roberts Stapleton
2005 – Delivered “Million Dollar Baby” painting to Clint Eastwood home
2005, 2006, 2010 – Featured artist with HP Printers at New York Art Expo
Published in over twenty-five countries
2010 – Featured at the entrance in New York Art Expo
2010- Painting “Let’s Go Riding” is at the highest height of all private residences in New York City.
2011 – Created a commemorative piece for the 100th anniversary for the Legal AidSociety of the State of Maryland
2012 – “Celebrity Artist for the Stars” at the LiveStyle Entertainment Film Lounge and
Supper Club at the Sundance Film Festival
2012 – Exhibit in collaboration with Ralph Lauren at his East Hampton and Southampton stores.

** To view live performances of music/painting collaborations and interviews, go to this link

2002, Photograph with the Elite of Canada

Copyright All Rights Reserved © 2014 Created by Appian Solutions
Contact Us